I went to see this amazing movie last week, The Philadelphia Story. We were in the tiniest room and it was surprisingly full – people of all ages, students, friends, young and old couples… Now, I know what you’re all thinking: “isn’t Publishers Inc supposed to be about publishing?” and, yes, you’re quite right.

For the sake of this article, I’m not going to review the movie – just in case you’re wondering, it’s a perfect mix of romance and comedy! Also, it came out in 1940 so technically you should all have seen it by now, right? For those who haven’t, here’s the scene I want to share with you today. Macaulay “Mike” Connor (James Stewart) is a reporter for Spy magazine (there, publishing, see!) and he’s asked to cover wealthy socialite Tracy Lord’s (Katharine Hepburn) wedding with the help of ex-husband C. K. Dexter Haven (Cary Grant) and photographer Liz Imbrie (Ruth Hussey). Of course, he’s not happy about that and gets mad at the publisher: he’s a great reporter, a writer, not a damn paparazzi! So the publisher asks Liz Imbrie if she, too, hates him, to which she replies, “No. I can’t afford to hate anybody. I’m only a photographer.”

Now, that scene was extremely funny – if you don’t believe me, watch the movie! But the reason I think most people laughed when she said her line is because they could relate to what she was saying – I certainly could. Because things haven’t changed that much in the end. Despite how fast-paced this industry might be, despite the fact that, as students, we’re often surprised to realise that books or articles published less than 5 years ago (on ebooks for instance) can already be obsolete… Despite all that, everybody could still relate to something that had been said 55 years ago. And this made me wonder: have things changed for the best, after all? Do people in this industry feel safer about their jobs today than they did 55 years ago?

Then I came to another realisation: just because I studied publishing did not mean I had to think publishing all the time, even when I was at the cinema… right? So I went back to admiring young black and white James Stewart, back to this world where nothing existed but me and him. 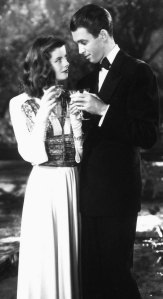